Famous vlogger and Youtuber Mumbiker Nikhil got married to Shanice Shrestha who is also a lifestyle and fashion vlogger on youtube.

Mumbikar Nikhil created a hyp of his marriage and suddenly on 31 January, he gave his fans a wonderful surprise by uploading a short marriage vlog. Later on, he uploaded a full long vlog of his marriage and explained how he planned the surprise.

On the wedding day, he revealed the face of his mother and his sister. This is the first time he showed his mother on camera without hiding her face. 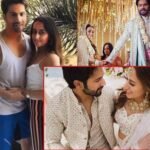